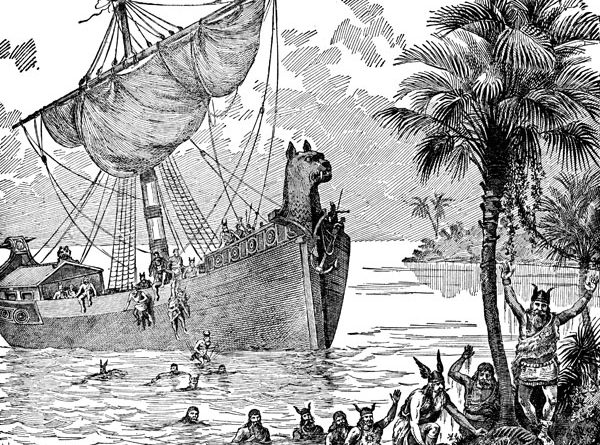 It seems a common misconception that the Vikings did not get down to Devon and Cornwall much but clearly that is untrue.

At our monthly meeting on 21st March, Derek Gore from the University of Exeter gave us an interesting insight into the Viking Invasion from as early as the first Viking age during 789 – 924.

In 836 it is recorded that King Egbert fought 35 ship loads at Carhampton but sadly lost many of his soldiers to the Vikings who were eventually defeated and withdrew. Why Carhampton? We learnt that the Vikings invaded places that were known to have great wealth i.e. monasteries, royal residences etc. The Vikings were only interested in portable wealth they could take back on their ships and were particularly drawn to silver which was easily melted down and made into jewellery. Leaders would share the spoils of war with their soldiers as payment. This wasn’t always a fair means of distributing the gains as they had no scales to assist them.

The second invasion recorded was at a place called Wicganbeorg which some believe could be Weekaborough in the district of Torbay.  Did the Vikings land at Torquay? To date there has been no archaeological evidence of a battle in that area. Both invasions were recorded in the English Annals.

The second Viking Age was 980 to 1069 and lasted up to the Battle of Hastings.  Led by the Kings of Denmark and Norway, they were keen to become Kings of England.

In all, three quarters of England were successfully infiltrated by the Vikings, but King Alfred the Great saved the day by holding strong with Wessex. He was succeeded by his son King Edward the Elder who posted lookouts along the coastline of the Bristol Channel to evade any further invasions.

In 1001 the invaders attacked Teignton (now known as Kingsteignton) but it is recorded that peace was then made, probably due to being bought off by vast quantities of coins and silver, and they set sail back to Scandinavia. Interestingly, they sailed past Dawlish which clearly did not hold much attraction to the Vikings. Exeter had less luck and the Vikings did land and ransacked the entire settlement before continuing on their journey back to their homeland.

Throughout these ages, many Vikings did choose to settle across England and became Christians. Evidence of this can be seen in churchyards with their distinctive stone carvings in the monuments

In North Yorkshire and Cumbria there are what are referred to as Hogback Stones which are stone sculptures found in churchyards. There are different styles found in Cornwall which suggest the Scandinavian influence and possible Settlement

Closer to home, in Copplestone, near Crediton, there is a stone monument believed to be of the Viking period and once again showing evidence of the Scandinavian period.

Items of jewellery discovered from Archaeological Digs include rings, amulets, jewellery cases and book covers, all with the intricate Viking design. Even a gold armlet obviously dropped by a Viking. The horses were not ignored either, several interesting pieces believed to be part of a horse harness have also been found, once again with the Scandinavian style.

Not forgetting placenames associated with this period – Sleep Isles now Isles of Scilly, or Lundy Isle, to name but a couple.

In summary, by the end of the 2nd Viking Age, Scandinavian landowners were prominent in Devon.

Finally, a heart-warming story from the Bodmin Gospel Book, which is believed to be the oldest book written in the Cornish language. It is also the oldest record of slavery in Anglo Saxon Britain. A woman called Elsigar purchased a Cornish female slave and her son from a Scandinavian and immediately gave them their freedom.

A worthy subject worth exploring more and our thanks to the excellent speaker.