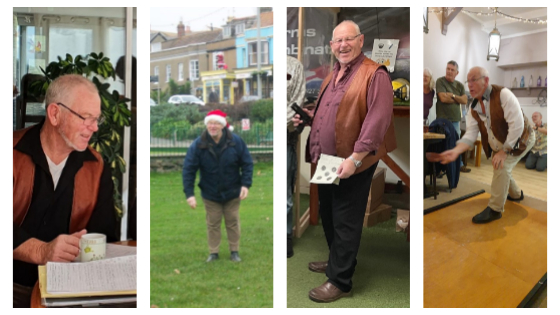 Having spent most of the first two years after retiring to Dawlish, under restrictions of Covid-19 lockdowns, it was a treat to be able to attend a play at the Shaftesbury Theatre last year.

In a conversation with another theatregoer, I was invited to have a look at the Dawlish & District u3a. At the time, I thought it sounded a little too seriously academic and grand for me, however when the Wine Appreciation group was mentioned, I just had to investigate further.  I then found that there were groups involved in so many interesting pastimes.

I decided to become a member, joining the Boules, Theatre and Adventure groups almost straight away.  Having been a member for no more than a few months, I was invited to stand for the committee and not long after that became the Groups Coordinator.  At first I had little idea of what I was required to do in this position (I’m still trying to figure that one out), still, some stuff is getting done.

The Badminton group that I had not long joined needed a new convenor, so I took that on with the help of another committee member.

There was a lot of interest in restarting the Gardens and Gateaux group that had been temporarily suspended when numbers dropped and the convenor stood down.  I agreed to convene that group for the first year, and what an interesting year it has been.  The Gardens and Gateaux trips were all blessed with fantastic weather.  We went to some lovely places that I would never have got around to visiting if not for the group.

Regularly attending Boules, Badminton, Gardens and Gateaux and committee meetings was keeping me busy, but not too busy to stop me joining the Beer and Skittles group; well, it’s just one night a month, and there’s Beer!

The appeal of sitting in a local pub garden with a cool pint and playing Backgammon or Chess also tempted me, so I started a Games group enabling me to find others with a similar outlook, sharing details and playing other group members at various locations.  We decided to host numerous games at the Tea and Chat meetings, so that everyone can have a go at something without taking it too seriously.

I can now look back at the year and say that, without doubt it has been an interesting and rewarding time.

I would like to give a big thank you to those who founded the Dawlish & District u3a as well as everyone involved in starting and running so many diverse interest groups, as well as all the friendly members who have been so welcoming.

Even with the many entertaining events I have participated in since joining, I have yet to experience half of what u3a has to offer, so there is bound to be more to come.

My hope for 2023 is that our established members continue to enjoy and support their groups and as the u3a continues to grow, it will make even more interest groups possible.

I hope you all manage to get the most from your involvement with our u3a.  (I wonder if we can each get a student discount card?)

I would love to see new convenors and new groups taking us even further in the New Year.

Would you like to start your own group based on some of your hobbies or interests?  We may be starting a Singing group soon, there then would be an opening for a convenor within that, for starters.

Should you be interested in taking up a more hands on role within the u3a, why not consider a convenor position?  It really is more rewarding than difficult.

Please contact me with your thoughts, suggestions and questions via enquires@dawlish.info.

Merry Christmas to you all!