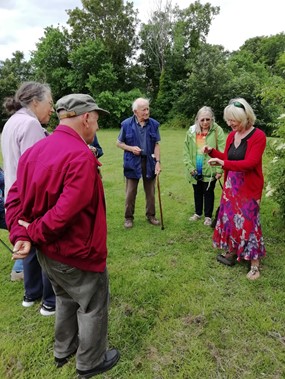 On Tuesday, 22nd June, seven members, including three new members of the Natural History Group gathered in the Newhay to be led by Kerry Sherwin on a walk around the park. Kerry was a medical herbalist for 20 years before she retired, so the walk was a fascinating introduction into the uses of some common wild plants.

We began with hemlock and learned how distinguish it from the more abundant cow parsley — vitally important considering that hemlock is deadly poisonous.

More beneficially we learned of the several benefits of nettles and cleavers, how the elderflower & berries were revered by the gypsies: used for hay fever, amongst other uses.  Yarrow (Achillea) was used as an astringent to stop and disinfect wounds, and promote healing. Plantain leaf could be used as a wound dressing; and burdock could be used as a cleanser of liver and bowel. Herb Robert contained tannin which was useful to stop inflammation of the mucous membrane, sore throat, etc.  Other medicinal uses could be derived from ivy, ground ivy and wood avens.

Finally, we retired for refreshments and to discuss the group’s future programme.  For this we were joined by Toby Sherwin who will lead our next meeting at 2 PM on Tuesday, 27th July, at 8, Badlake Hill, on Sea Shells.  BYOS for expert identification